Former Dodger owner Peter O’Malley will receive the honor of “The Order of the Rising Sun, Gold Rays with Neck Ribbon” from the Government of Japan, conferred by Emperor Akihito, at a ceremony in Los Angeles later this spring.
The Government of Japan established The Order of the Rising Sun on April 10, 1875 as its the first national decoration awarded and the country’s highest honor for a non-Japanese citizen. award celebrates those who have “distinguished achievements in international relations, promotion of Japanese culture, advancements in their field, development in welfare or preservation of the environment.”
O’Malley is being recognized for more than 60 years of promoting friendly relations through baseball between Japan and the United States and the development of Japan’s baseball world. With approximately 85 trips to Japan, O’Malley has been at the forefront of numerous cultural exchanges between the two nations, dating back to 1956, when he joined his parents, Kay and Walter, and his sister, Terry, on the National League champion Brooklyn Dodgers’ first Goodwill Tour to Japan.
“I am extremely humbled and grateful for this honor,” said O’Malley. “The 1956 trip introduced me to the people of Japan, and they made a lasting impact on me. I saw first-hand fan enthusiasm throughout the country, their appreciation of baseball and warm welcome to the Dodger team. Consequently, I was fortunate to establish lifetime friendships through the common language of baseball, and I’ve enjoyed bringing people together from the two countries.”
Among other highlights: O’Malley’s Dodgers signed pitcher Hideo Nomo, the first player from Japan in 30 years to play Major League Baseball, in 1995, opening the door for more than 50 players to follow. And in 2003, O’Malley established the Akihiro “Ike” Ikuhara and Peter O’Malley Memorial Sports Management Class at Waseda University and held the first of 12 lectures featuring internationally-renowned speakers.
（April 29, 2015 by Dodger Insider and Echo Park-Silver Lake Patch） 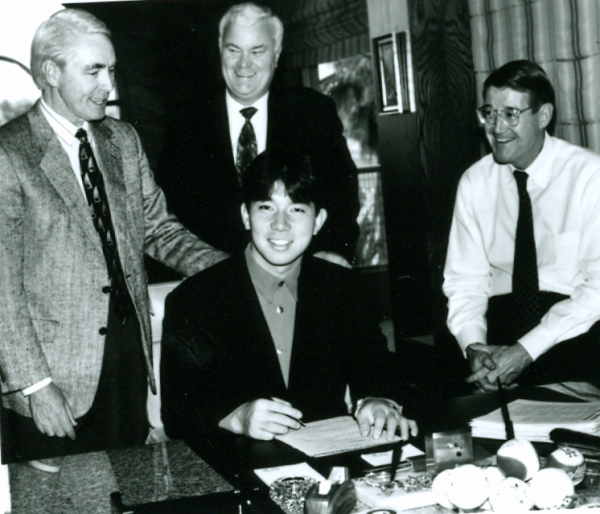