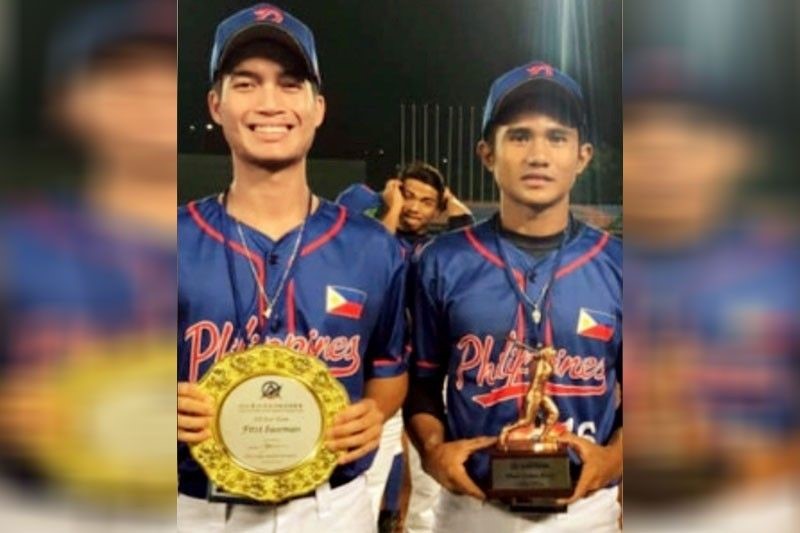 DDiego Lozano (left) and Edwin Bosito
December 08, 2019
NEW CLARK CITY — The Philippines stormed the field with a barrage of runs to defeat Thailand, 15-2, and capture the baseball gold medal Sunday in the 30th Southeast Asian Games at The Villages here.
It was a clean sweep for the PH batters, who were led by short stop Ros Bernardo, pitcher Francis Gesmundo and catcher Mark Steven Manaig.

Leading Hitter:
Er. Bosito (Philipppines) 0.538
For a while, there seemed to be trouble in the air for the Philippine men’s baseball team at the Southeast Asian (SEA) Games in the Villages, Clark Freeport Zone. Thailand, backed by five Thai-Americans, gave the host nation a scare before going down, 3-2, in the opener of both countries.
In SEA Games history, men’s baseball was played only thrice before this year’s conclave. The Philippines took the first gold at Thailand’s expense, 11-0 in the championship game in 2005. Then, Thailand hit paydirt in 2007 before the Philippines regained the crown by beating Indonesia, 2-0, in the 2011 final. Baseball made a return to the SEA Games calendar this year after it was put in cold storage in the last three editions.
“Our toughest opponents were Thailand and Indonesia, in that order,” said Philippine Amateur Baseball Association (PABA) secretary-general Pepe Muñoz. “The format was a round robin for the five participating countries then the gold medal game was played between the top two finishers and a bronze medal game for the next two. We were confident of winning gold from the start.”
Thailand showed up with shortstop Oliver Dunn, 21, pitcher Travis Owens, 19, pinch-hitting specialist Ryan Rodgers, 18, catcher Jack Daru, 27 and centerfielder Joe Daru, 29 – all Thai-American recruits. The Daru brothers’ mother is Thai and father from Detroit. Joe attended the New York Institute of Technology while Jack went to Vanguard University in California. Before playing in the SEA Games, the Thai squad trained for a month in China.
Last October, the Philippines warmed up for the SEA Games with a 4-1 effort at the Asian Baseball Championships in Taichung, Taiwan. The batters’ only loss was a 12-2 decision to Korea in the preliminaries but the Philippines failed to qualify for the Super Round because of an inferior quotient. The Philippines brought down Pakistan, 11-0, China, 1-0, Hong Kong, 10-0 and Sri Lanka, 7-1. Before the competition, the Philippines was ranked No. 33 in the World Baseball Federation standings but in Taichung, beat three countries ahead in the honor roll – No. 20 China, No. 24 Pakistan and No. 28 Hong Kong.
PABA president Chito Loyzaga deployed the same team that saw action in Taichung for the SEA Games led by first baseman Diego Lozano, centerfield Edwin Bosito and 2019 UAAP MVP pitcher Francis Gesmundo. In the opener against Thailand, the Philippines came back from a 1-0 deficit in the first inning to score two runs in the second. Another run in the sixth sealed it. Thailand registered a run in the eighth but it went for naught. Recording runs for the Philippines were Ferdinand Liguayan with two and Mark Manaig with one. Jerome Yenson had two RBIs. Gesmundo picked up the win and finished with five strikeouts in eight innings. Miguel Salud closed it out in the last inning for the save.
Then, the Philippines was never threatened in bowling over Cambodia, 12-0, Singapore, 17-0 and Indonesia, 14-1 to arrange a rematch with No. 2 Thailand in the final. After dropping its first game to the Philippines, Thailand regrouped to beat Singapore, 12-7, Cambodia, 14-0 and Indonesia, 6-4. The gold medal match was one-sided. The Philippines zoomed to a 9-0 lead after three innings and coasted to a 15-2 decision. Cracking hits were Adrianne Ros Bernardo (two, including a triple), Bosito (two), Jerome Yenson (one with two RBIs), Jonash Ponce (three), Ignacio Escano (one, a double), Manaig (one), Liguayan (one), Juan Macasaet (one), Clarence Caasalan (one) and Jennald Pareja (two). Rotating on the mound were Gesmundo, Romeo Jasmin, Vladimir Eguia and Salud.
“The big difference between our first game against Thailand and the gold medal match was our hitting adjusted,” said Muñoz. “We were slow in the first game with only two hits. We were also slow in the first few innings against Cambodia. Then, we made adjustments which carried over to the rest of the tournament.”
Muñoz said Bosito, who had the most stolen bases in the Asian Championships, was the sparkplug. “He was outstanding with nine RBIs, 15 stolen bases, 10 runs and nine hits,” he said. “Edwin kept the team moving. Honorable mention goes to Bernardo with eight runs, seven hits and five RBIs, Lozano with four hits and six RBIs and Ponce with seven hits and six RBIs. Ponce hit the team’s only homer (against Indonesia). In pitching, it’s hard to choose who was outstanding because they all performed very well.”
Loyzaga said his aim is to provide more playing opportunities in baseball domestically. “We’ll do bare-bones tournaments,” he said. “We want to keep playing even after the collegiate season. Once the Rizal baseball field is renovated, we can host an international competition with sanction from the Baseball Federation of Asia.”