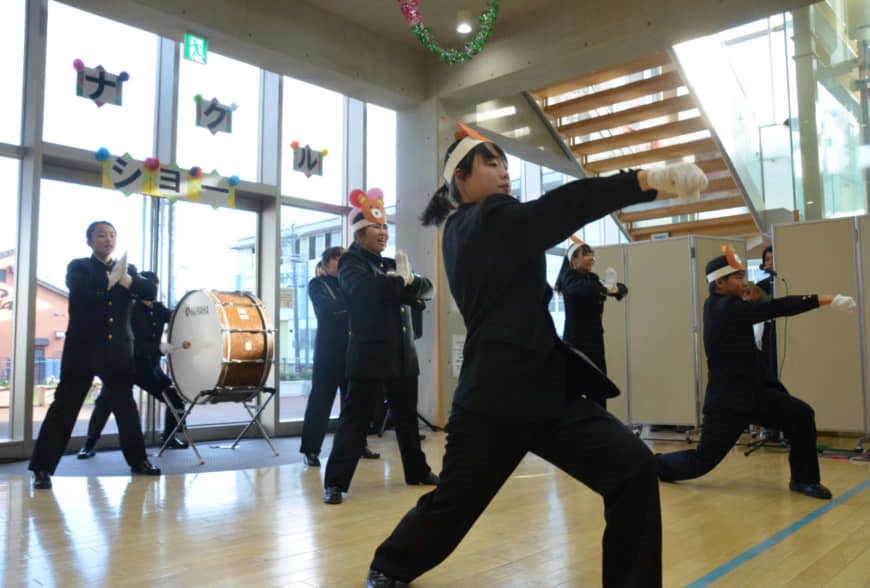 While the traditional activity is becoming less popular among male students, many ōendan across the nation have been attracting girls in recent years.

At Aichi Prefectural Toyohashi Minami High School in the city of Toyohashi, 10 out of 11 ōendan members are female students.
On Nov. 17, the members wore black uniforms, white headbands and white gloves as they performed at an event held at a community center in the city, shouting “Osu!” — a common exclamation in Japan — and “Hooray, hooray!” amid loud applause from local residents.
The school’s ōendan had been active since it was established in 1978, but the number of members eventually began to decline, finally dropping to zero in 2008.
In 2015, the school recruited new members so it could revive the club following requests from the club’s alumni, who said it was sad not to have any squad to cheer the school’s baseball team. And those who volunteered to join were all female students, meaning girls belonged to the club for the first time in its history. Since then, members of the club have been increasing year by year, with most joining being girls.
“I was worried at first to see only female members, but their performances are bright and lively,” said Takahiko Maruyama, a 55-year-old teacher at the high school who is an alumnus and supervisor of the club.
The members say they joined the club for a variety of reasons, including being impressed by girls wearing gakuran uniforms and being sports fan. One member said she was influenced by the 2008 movie “Fure Fure Shojo” (“Hooray Hooray Girl”), which features a high school girl becoming a leader of an ōendan to revive the club.
Most of the members are also members of other clubs, such as a brass band, drama, tennis and badminton.
Since it was resumed, the club has been led mostly by female students. “Because most members are girls, boys may feel reluctant to join,” said Rio Yamada, 17, the 42nd leader of the club. “But gender doesn’t matter when it comes to wanting to cheer others.”
The members have watched videos of performances by ōendan of other high schools and universities on the internet and created their own cheering style.
“Compared with other schools (with male members), we can’t shout in a deep voice and our fist pump performance may not look as powerful,” Yamada said. “But there are things that only we can do.”
After their practices, they go to a cafe together and have girl talk while eating parfait and cakes. Yodai Suzuki, 16, the only male member of the club, said he participates in such chats. “I don’t feel uncomfortable and I don’t feel any gender differences,” he said.
At Gifu Commercial and Business High School in the city of Gifu, all of its 14 ōendan members are girls. According to Yuko Koizumi, a teacher and supervisor of the club, the club has only had female members for the past decade. “They are cheering wildly just like boys,” Koizumi said.
As for university ōendan, at Waseda University, a woman became one of the 15 members who lead the performances for the first time in 2011. In 2017, Meiji University’s ōendan had a female leader, a first for an ōendan of the Tokyo Big6 Baseball League, an intercollegiate baseball league comprising Hosei University, Keio University, Meiji University, Rikkyo University, University of Tokyo and Waseda University.
Meanwhile, an association made up of ōendan at six universities based in Kyushu said as many as three of the clubs have female leaders this year.
The leaders of the 69-year-old ōendan at Meijo University in Nagoya have been women for the past three years.
“Both men and women share the soul and ambition that lie at the heart of cheerleading,” said a Meijo University spokesperson. “I think the willingness of women (to participate in ōendan) is offering an opportunity to think about what cheerleading is all about.”