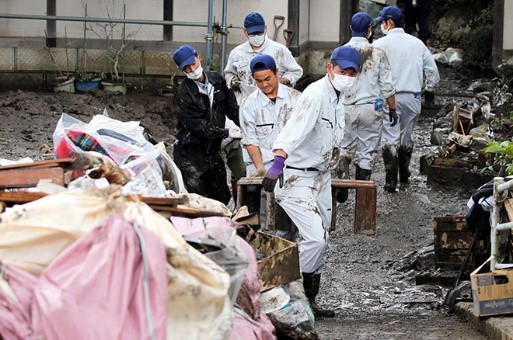 Members of an agricultural high school baseball club volunteer to carry damaged furniture and other items from a house hit by Typhoon No. 19 in the Iisen district of Marumori, Miyagi Prefecture.
（October 21, 2019  THE ASAHI SHIMBUN 9Despite such efforts, there is still a shortage of manpower needed to recover from the considerable flood and other damage wreaked by Typhoon No. 19, which left more than 80 people dead.

In Marumori, Miyagi Prefecture, about 500 people gathered from across Japan on Oct. 20 to help remove mud from houses, carry out furniture and remove debris.
Fifteen members of a baseball club of an agricultural high school in Natori, Miyagi Prefecture, also volunteered their time in Marumori, wearing coveralls for farming and carrying shovels.
Among other clean-up work, they carried such items as a table and washing machine out of a house belonging to Atsushi Tanimizu, 88, which had been flooded due to the typhoon.
Tanimizu, who lost his wife three years ago, said that as items such as soaked tatami mats were heavy: "I was unable to carry them on my own. The young people who visited provided such great help."
The baseball team's practice grounds were inundated and their equipment washed away during the 2011 earthquake and tsunami. They resumed practices using the grounds of another school and equipment provided by people from across Japan.
Recalling the generosity shown by others in the aftermath of the disaster, the team manager, Toru Akaizawa, 39, decided to have his team serve as volunteers by canceling a practice game.
"There are things that need to be done before baseball practice," he said. "It's thanks to the people who helped us that we can play."
Team leader Shunsuke Matsui, 16, said: "We want to return the gesture made by the many volunteers who came to help us following the earthquake and tsunami disaster in 2011.
"I realized once again that we wouldn't be playing baseball without their generosity."