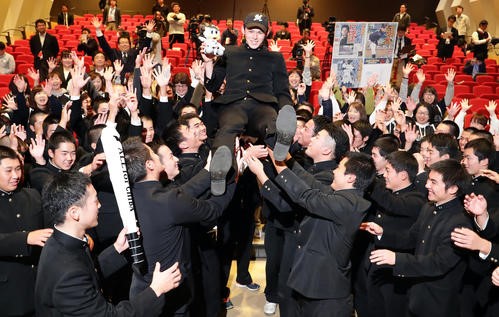 TOKYO (October 17, 2019 あMainichi Japan) -- The Lotte Marines took hard-throwing high school pitcher Roki Sasaki in Japanese baseball's amateur draft Thursday after four teams selected the teen talent who has been on the radar of major league clubs.
The 17-year-old Sasaki's fastball has been clocked in competition at 160 kilometers (99.4 miles) per hour and as high as 163 kph in a national team tryout camp.
"He's an extraordinary pitcher," Marines manager Tadahito Iguchi said after drawing the winning lot. "It's scary to think how far he might go. He was the best player available and now it's incumbent on us to nurture his potential."
Sasaki made front-page news this summer when his Ofunato High School manager controversially kept the right-hander out of Iwate Prefecture's championship game in order to protect his arm.
The pitcher, who said at an Oct. 2 press conference that he wants to go to a strong club, suggested he would be willing to play for whichever team won his rights on draft day.
Because of his high standing among overseas scouts, Sasaki has the option of not signing a Nippon Professional Baseball contract and instead turning pro with a major league club next June. The pitcher, however, has said he is not yet thinking about a move to the majors.
"I'd been wondering what team it would be, and now I'm relieved," Sasaki said in Ofunato, Iwate Prefecture. "It seems that I'm now at the starting line. I want to become the best pitcher in Japan and contribute to a championship team."
"I think it would be great if I could surpass the current Japanese record for (pitching) speed."
Prior to the draft, Sasaki held brief talks with scouts from every one of NPB's 12 clubs except the Nippon Ham Fighters.
The Fighters, who developed both Yu Darvish and Shohei Ohtani before allowing them to move to the major leagues via the posting system before they were eligible to file for free agency, were the first club to state publicly that Sasaki would be their first choice.
In addition to the Fighters, three other Pacific League clubs named Sasaki as their top pick -- the Marines, Seibu Lions and Rakuten Eagles.
"I don't have any real impression of Ofunato, where he's from, but I'll be going that way soon," Iguchi said. "I dreamed I drew the winning lot, so I expected I would."
For those wishing to see Sasaki pitch in the majors, the Marines are a team that might conceivably post him. Neither of the two clubs that have steadfastly rejected using the posting system, the Central League's Yomiuri Giants and the Pacific League's SoftBank Hawks, named Sasaki as their top pick.
The second-biggest name in the annual draft, Yasunobu Okugawa, who pitched Ishikawa Prefecture's Seiryo High School to the final of this summer's national high school championship, went to the CL's Yakult Swallows.
New Swallows skipper Shingo Takatsu, the second Japanese former major leaguer to manage in NPB, drew the winning lot in a three-way drawing.
The Hanshin Tigers and Giants also named Okugawa as their top choice.
Unlike the American style amateur drafts, the first round of NPB's draft gives every team an equal chance of landing their first-choice selection. Teams nominate their first choice in secret, and the player's negotiating rights are decided by drawing lots.
Hall of Fame right-hander Hideo Nomo set the current record for most popular first-round pick in 1989 when eight teams selected him. The record was tied the following year by university pitcher Hideo Koike.
Two years ago, the Fighters won a seven-way lottery for the rights to high school first baseman Kotaro Kiyomiya, who matched the record for a high schooler and position player set by Kosuke Fukudome in 1995.
Seattle Mariners left-hander Yusei Kikuchi owns the record for most-popular high school pitcher, when six teams selected him in the 2009 draft.
All teams that lose out on lottery picks nominate another player in secret, with lotteries used once more to determine who gets players chosen by more than one team. This process goes on until all 12 teams have the rights to one player.
High school infielder Takaya Ishikawa also went in a three-way lottery to the Chunichi Dragons, who also got the pick of last year's position players, Akira