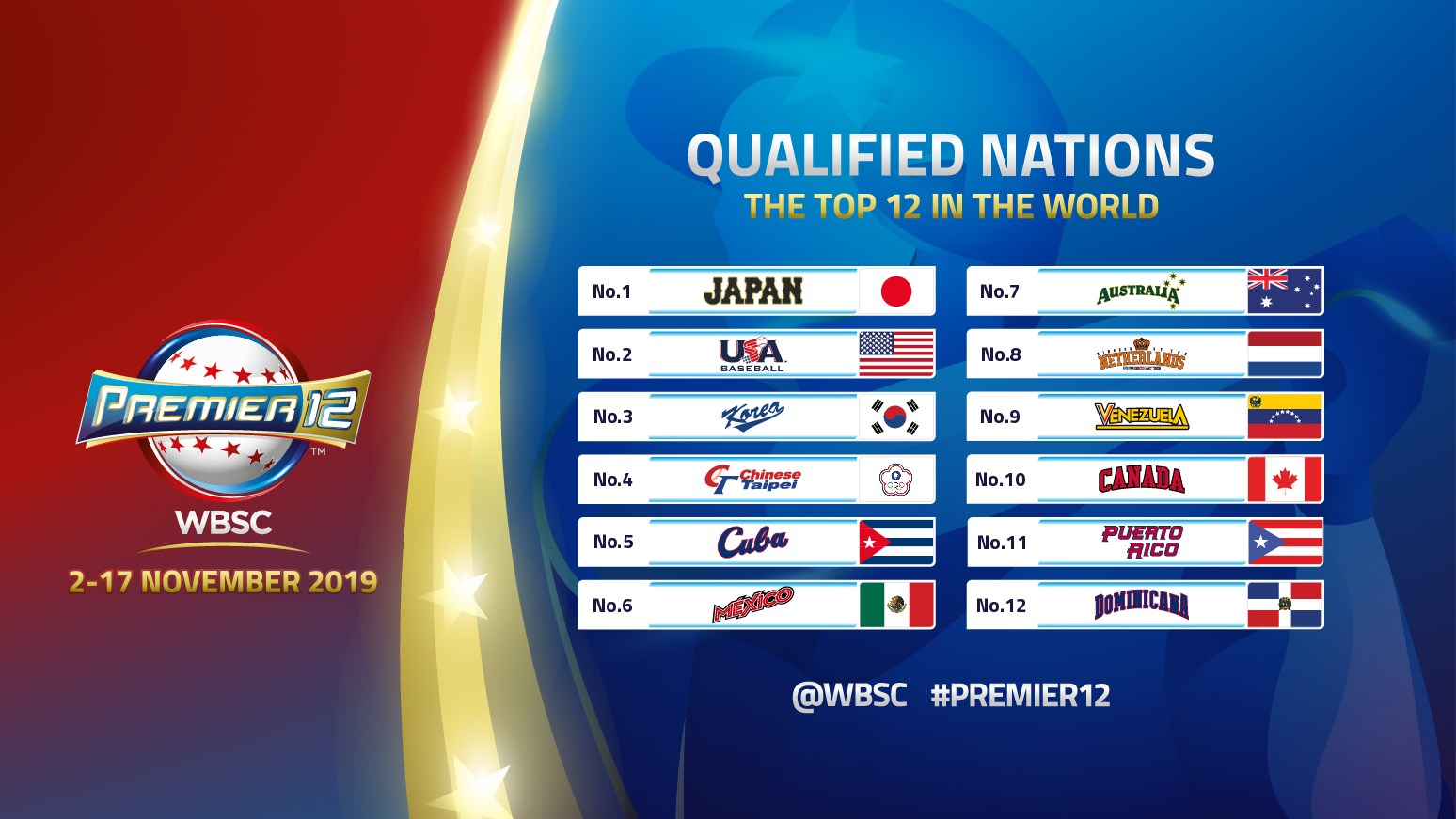 LAUSANNE, Switzerland -- The World Baseball Softball Confederation (WBSC) today unveiled the qualified nations -- the Top 12 ranked countries in the world -- and the dates of the WBSC Premier12® 2019, with the flagship international baseball event in 2019 to be staged across 32 games and multiple countries from 2-17 November.

WBSC is also set to increase prize money distribution for the II WBSC Premier12 2019, following a successful inaugural edition in 2015. The Premier12 will also award the most world ranking points of any international baseball competition.

The Men's National Teams from baseball's best-ranked countries across four of the five Olympic continents will meet in the WBSC Premier12 2019, including No. 1 Japan, No. 2 United States of America, No. 3 Republic of Korea, No. 4 Chinese Taipei, No. 5 Cuba, No. 6 Mexico, No. 7 Australia, No. 8 Netherlands, No. 9 Venezuela, No. 10 Canada, No. 11 Puerto Rico and No. 12 Dominican Republic.

WBSC President Riccardo Fraccari said: "Congratulations to the top 12 teams in the world for qualifying into the Premier12. The inaugural WBSC Premier in 2015 was the most-watched international sports event of the year in host nations Chinese Taipei and Japan, and with two teams advancing from Premier12 to the Tokyo 2020 Olympic Games, the 2019 Premier12 is set to exceed all previous benchmarks, while building excitement for Tokyo 2020, the Olympic Movement and the sport of baseball itself."

The Premier12 2019 will allocate two spots for baseball's historic Olympic return at the Tokyo 2020 Games: the top nation in the final standing from the Asia/Oceania territory (not including already qualified Japan) and the top finisher from the Americas.

The 12 National Teams will be drawn into three groups of four (3x4) to start the global tournament, with Chinese Taipei, Korea and Mexico each hosting a group.

The top two finishers from each group will advance (and carry the head-to-head result between them) to the Super Round (Robin) at Japan's Chiba Marine Stadium and the Tokyo Dome.

The top two teams from the Super Round will compete in the Final at the Tokyo Dome, while the third- and fourth-place finishers will play in the bronze medal match.

The full Official Look and branding identity of the WBSC Premier12 2019 will be unveiled in a future press announcement.

Current world No. 3 Korea, with a roster filled with biggest stars in the Korea Baseball Organization (KBO) professional league, won the inaugural WBSC Premier12 in 2015.